We receive data from our users via pings. There are several types of pings, each containing different measurements and sent for different purposes. To review a complete list of ping types and their schemata, see this section of the Mozilla Source Tree Docs.

Pings are also described by a JSONSchema specification which can be found in the mozilla-pipeline-schemas repository.

There are a few pings that are central to delivering our core data collection primitives (Histograms, Events, Scalars) and for keeping an eye on Firefox behaviour (Environment, New Profiles, Updates, Crashes). 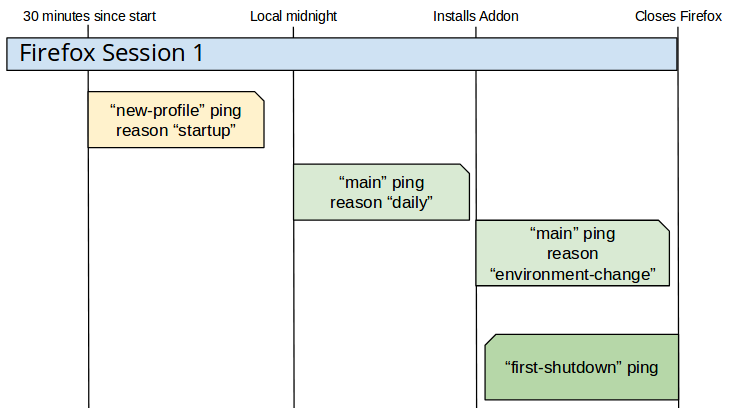 The "main" ping is the workhorse of the Firefox Telemetry system. It delivers the Telemetry Environment as well as Histograms and Scalars for all process types that collect data in Firefox. It has several variants each with specific delivery characteristics:

It was introduced in Firefox 38.

The "first-shutdown" ping is identical to the "main" ping with reason "shutdown" created at the end of the user's first session, but sent with a different ping type. This was introduced when we started using Pingsender to send shutdown pings as there would be a lot of first-session "shutdown" pings that we'd start receiving all of a sudden.

It is sent using Pingsender.

It was introduced in Firefox 57.

The "event" ping provides low-latency eventing support to Firefox Telemetry. It delivers the Telemetry Environment, Telemetry Events from all Firefox processes, and some diagnostic information about Event Telemetry. It is sent every hour if there have been events recorded, and up to once every 10 minutes (governed by a preference) if the maximum event limit for the ping (default to 1000 per process, governed by a preference) is reached before the hour is up.

It was introduced in Firefox 62.

Firefox Update is the most important means we have of reaching our users with the latest fixes and features. The "update" ping notifies us when an update is downloaded and ready to be applied (reason: "ready") and when the update has been successfully applied (reason: "success"). It contains the Telemetry Environment and information about the update.

It was introduced in Firefox 56.

When a user starts up Firefox for the first time, a profile is created. Telemetry marks the occasion with the "new-profile" ping which sends the Telemetry Environment. It is sent either 30 minutes after Firefox starts running for the first time in this profile (reason: "startup") or at the end of the profile's first session (reason: "shutdown"), whichever comes first. "new-profile" pings are sent immediately when triggered. Those with reason "startup" are sent by Firefox. Those with reason "shutdown" are sent by Pingsender.

It was introduced in Firefox 55.

The "crash" ping provides diagnostic information whenever a Firefox process exits abnormally. Unlike the "main" ping with reason "aborted-session", this ping does not contain Histograms or Scalars. It contains a Telemetry Environment, Crash Annotations, and Stack Traces.

It was introduced in Firefox 40.

In the event a user opts out of Telemetry, we send one final "deletion-request" ping to let us know. It contains only the common ping data and an empty payload.

We estimate that 93% of release channel profiles have telemetry enabled (and are therefore included in DAU).

Pingsender is a small application shipped with Firefox which attempts to send pings even if Firefox is not running. If Firefox has crashed or has already shut down we would otherwise have to wait for the next Firefox session to begin to send pings.

Pingsender was introduced in Firefox 54 to send "crash" pings. It was expanded to send "main" pings of reason "shutdown" in Firefox 55 (excepting the first session). It sends the "first-shutdown" ping since its introduction in Firefox 57.

The data pipeline appends metadata to arriving pings containing information about the ingestion environment including timestamps, Geo-IP data about the client, and fields extracted from the ping or client headers that are useful for downstream processing.

These fields are available in BigQuery ping tables inside the metadata struct, described in detail in the "Ingestion Metadata" section of this article.

Since the metadata are not present in the ping as it is sent by the client, these fields are documented here, instead of in the source tree docs.

The main ping includes histograms, scalars, and other performance and diagnostic data. Since Firefox 62, it no longer contains event data; events are now sent in a separate event ping.

Derived datasets are processed from ping tables. They are intended to be:

Ping data lives in BigQuery and is accessible in STMO; see the BigQuery cookbook section for more information. Before analyzing raw ping data, check if a derived dataset can answer your question. If you do need to work with raw ping data, be aware that the volume of data can be high. Try to limit the size of your data by controlling the date range, and start off using a sample.

You can find the complete ping documentation in the Firefox source documentation. To augment our data collection, see Collecting New Data and the Data Collection Policy.